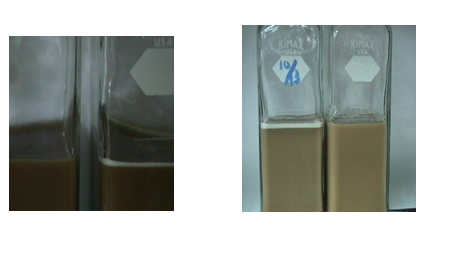 Definition of emulsifier and stabilizer.

The emulsion in food is more complex than the oil-water mixture, such as milk, milk tea, soy milk, etc., which is thermodynamically unstable. The droplets in the dispersed phase will gather together to reduce the area in contact with the continuous phase in order to generate excess energy to form a thermodynamically stable oil-water separation state.

This oil-water separation state is mainly manifested in: oil slick (Creaming); flocculation, and coalescence. The action of emulsifier, stabilizer and mechanical force causes small oil droplets (O/W) or water droplets (W/O) to be dispersed in the continuous phase, and maintains the function of emulsifier and stabilizer.

Emulsifiers and stabilizers are "interacting agents" that can:

Through the knowledge of various emulsifiers and hydrophilic colloids, we have developed a series of stabilizers that can be applied to cold storage and storage at room temperature: coffee, milk tea, coconut milk and other products.